Tanto is a historical Japanese dagger that was often designed for strong thrusts but suited well for cuts as well. Tanto is typically single edged but double edged versions are also known. The first Tanto-daggers we introduced during the 9th Century and they have remained as weapons and tools since then as use continues still nowadays.

Tanto had a great ceremonial meaning as the Samurai performed ritual suicide (seppuku or harakiri in Japanese) with the Tanto or Wakizashi. A Samurai who had shamed himself could regain lost honor by cutting his own abdomen open. Dying from disembowelment is one of the most painful ways to die and this shows that the Samurai was not a coward or trying to find the easy way out, but to leave this world holding his head high. Samurai could for example have been surrounded in battle and as victory was no longer possible he chose to deny victory from his enemy as well by killing himself. Sometimes Samurai were also ordered to perform seppuku as a death penalty. It was seen as a much better option to perform your own execution as the ritual regained your lost honor and you weren’t considered as a criminal anymore after the seppuku. Typically an assistant cut the neck of the Samurai with a sword right after disembowelment to keep the Samurai from crying out in pain. This also ensured that the last and remaining expression on the face wasn’t a horrified face contorted in agony.

This Tanto from the Hanwei Practical Plus –series provides a very economical dagger as functional and dependable as the Practical Tanto, but using more traditional fittings and construction methods. The 1566 high carbon blade is forged and differentially hardened in the traditional claying method, producing a prominent and traditional hamon, wavy line near the edge that was created when hardening the blade. This line shows you the transition from the harder edge to the softer back. Hard edge cuts better and keeps a sharp edge longer while softer back gives resilience and shock absorption qualities to the blade. The harness of the edge is HRC 60 and the hardness of the softer back is HRC 40.

This Practical Plus Tanto features genuine Same (rayskin) on the Tsuka (handle), with a Tsuka-Ito (handle wrap) specially developed for its gripping qualities. The long nakago (tang) is pegged with traditional bamboo pegs for security. All of the fittings of the sword that are mounted on top of the blade are called Koshirae as a whole. On this dagger these fittings (Koshirae) are decorated in a Japanese Dogwood motif. Menuki, the grip-enhancing brass ornament under the Tsuka-Ito, features a dragon. The handsome Tsuba is made of iron with a brass collar, Habaki. The flat black Saya (scabbard) features a black cotton Sageo. The Practical Plus Katana and the Practical Plus Wakizashi match this Tanto and provide a useful, traditional and elegant samurai set.
Included is traditional black cloth bag to keep your dagger in pristine condition when in storage or while transporting. Made by Hanwei. Specs can vary slightly from piece to piece. 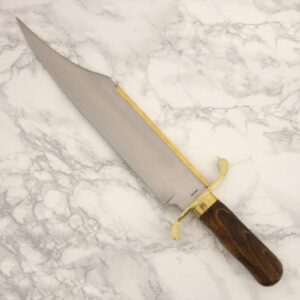 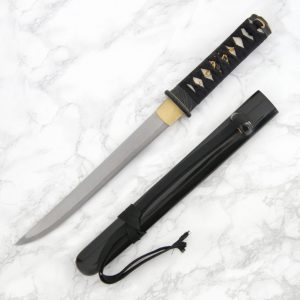 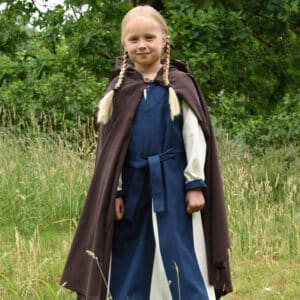 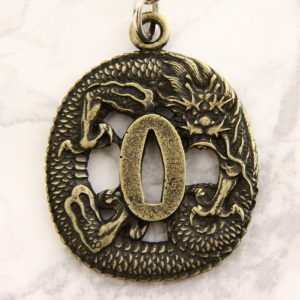 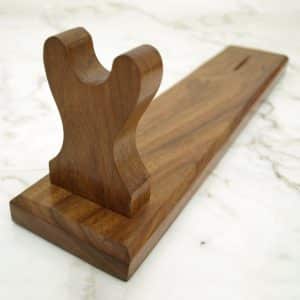